How to read History Strip Diagrams 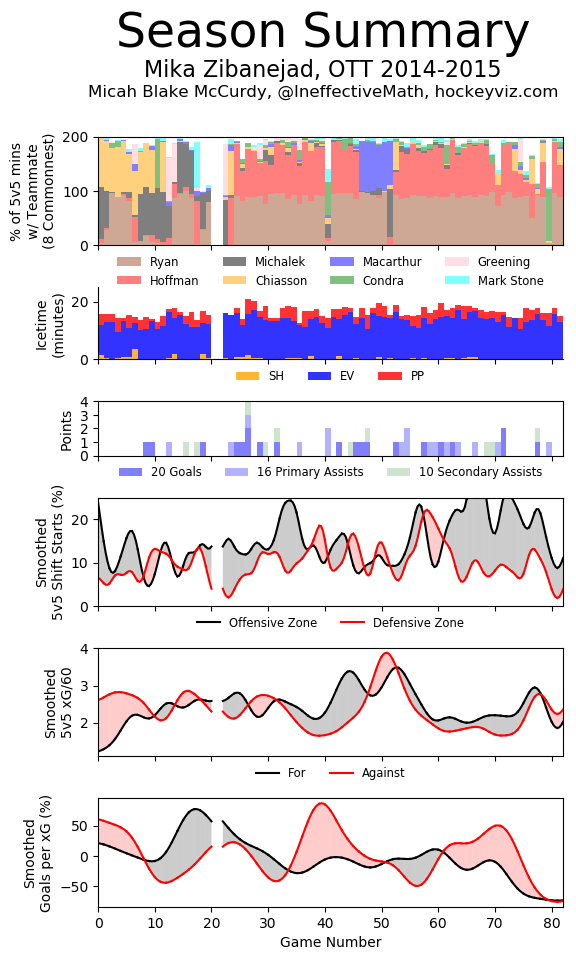 As an example, take Mika Zibanejad in 2014-2015. He's listed by the NHL as a centre, which is largely what he played -- but be wary, many players are listed by the league in the wrong position.

The first strip shows his 5v5 linemates. To keep the colours distinguishable, I only show his ten most common linemates; they appear in the legend on the right in order. He played with Bobby Ryan (red) more than anybody else and then Mike Hoffman (grey) was next. Since Zibanejad is a forward, I only show forwards. Since forwards usually play with two other forwards at 5v5, the y-axis adds up to 200%. In the handful of games where the bar is shorter than 200%, Zibanejad played with a smattering of other players whom he hardly played with in other games.

The second strip shows ice-time. Blue is used for even strength play, dark for 5v5 and light for 4v4. Powerplay time is shown in red, with 5v3 time in dark red; similarly, shorthanded time is shown in yellow with 3v5 time in dark yellow. We see Zibanejad played roughly 15-20 minutes a game, with occasional use on the powerplay and on the penalty kill.

Notice also that Zibanejad missed two games--games 20 and 21. The chart simply displays no data here; I don't yet differentiate for healthy scratches vs time missed to injuries or time sent down to lower leagues. Sadly, a handful of games (all in previous seasons) have no publicly available data; these games are also blank.

The third strip shows (adjusted, see below) shots per sixty minutes. The black line shows all shots--that is, blocks, misses, saves, or goals--that were taken by Ottawa at 5v5 while Zibanejad was on the ice. The red line shows the same thing for Ottawa's opponents. When the red line is above the black line, that shows Zibanejad being mostly hemmed in his own zone, losing puck battles, not breaking the puck out, etc. -- all the things that lead to the opponent having the lion's share of the puck. When the black line is above the red line that shows times when Ottawa took the majority of the shots during Zibanejad's shifts, suggesting Zibanejad was driving play in these times; winning faceoffs, passing well, gaining the zone, doing the things that generate offence.

Dominant players have large swathes of black shading, showing long periods where their shifts were marked by driving the puck down to the offensive zone rather than the reverse. When the lines are both high, that shows an exciting, high-event style with lots of shots for both teams. When the lines are both low, that depicts a low-event style with lots of neutral zone play and not many shots. The central dotted line at around 54 shots per 60 minutes is league average, with one standard deviation above and below the mean shown with fainter dotted lines around 67 and 44 shots per minute. Zibanejad was by turns out-shot and was out-shooting his opposition, with a generally slightly above-average event rate.

Shot metrics are, broadly, the most repeatable measures of skill for which we have good information. The adjustment method is use is score-and-venue adjusted shots, where each shot is counted slightly less when it is historically easier to generate (that is, when trailing, or when at home). This measure is the best single predictor of future success for teams that is well-known.

The fourth strip shows 5v5 goals per (adjusted) shot, in black for Ottawa while Zibanejad was on the ice and in red for Ottawa's opponents during his shifts. League average (not shown yet) is around 5%, considerably lower than the league average for goals per shot-on-goal. The effect of individual players on either figure (onice scoring percentages, for or against) is extremely limited and is mostly explainable by luck even over periods as small as several games. However, decisions about players are still routinely made on the basis of these results, so they are important for understanding the history of a season. For Zibanejad, you can see a dreadful scoring slump in the final ten games of the season, accompanied by a similar drop in opponent scoring.

The shot and scoring percentage strips are smoothed so that they appear less chaotic. The smoothing method is technical and not especially interesting; it is a little bit like a moving average. The value shown for a particular game represents both that game and a little bit of the next few and previous few games.